The tournament had 5 teams;
Winton
Preswitch A and B
Stalybridge Celtic Juniors Blues and Whites 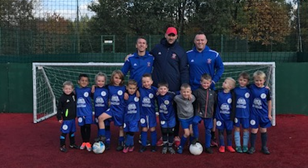 The top two teams from the group went through to the final. Unfortunately the Whites didn’t make the top 2, however, the Blues were at the top of the group and progressed to the final to play Winton.

The Blues were victorious in the final, with each player taking home a medal, and the team receiving the tournament trophy, new playing bibs and match ball.

Stalybridge Celtic Juniors would like to thank Bolton Power league for hosing the tournament and all the parents and coaching staff involved getting the kids out and enjoying football!

Thanks to Matt, Glenn and Bryn for volunteering to take the new under 6s teams on their first step into grassroots football, the first of many more to come!